Skip to content
This site has limited support for your browser. We recommend switching to Edge, Chrome, Safari, or Firefox.

When thoughts of adopting a child started popping into Kayla Lupean’s mind in 2017, it was something she knew she needed to explore.

She had been single for a few years following a divorce in 2013 and was starting to think about the next chapter of her life.

“I dated for a few years and just was not meeting anybody that I could see a real future with,” she says. “I turned 30 and I really started thinking about, what does the future look like for me if that doesn’t include a partner. I knew that motherhood was something that I definitely wanted to experience. So, very quietly, adoption sat in the back of my mind. I would be running errands or working and out of nowhere, the thoughts of adoption kept popping up.”

Lupean decided to talk to her mom, who was a nurse at an OB-GYN clinic, about her feelings.

“I said, ‘you know, for some reason, I keep thinking about adoption. Does anyone ever come into your office looking to place for adoption,’” Lupean says.

Her mom said that she didn’t think so, but she would check with the doctor that ran the practice. “So, she asked the doctor and he said that it hadn’t happened in the 25 years he had been with the practice. The very next day, my daughter’s birth parents came in and asked the same doctor if he knew anyone looking to adopt.”

“It definitely felt like a very meant to be situation,”  she says. “I mean what are the chances of all of these things colliding at one time.”

The birth mother was about eight weeks away from delivering Lupean’s now 5-year-old daughter, Elsie, so there was a lot of work that needed to be done quickly before her arrival.

“In those eight weeks, I had to do a home study, hire an attorney and find someone to do a birth mother assessment which ensures that she had a clear understanding about the adoption and all that it entails,” Lupean says. “It was technically considered a private adoption, but because it wasn’t a placement/match through an agency, I had to figure out all of these moving pieces and hire them individually.”

During that time, she continued to communicate with the birth parents and also came up with a hospital plan with the birth mother to make the experience as comfortable as possible.

“I found a checklist for birth mothers to really go through and ask all of the questions of what they wanted in the hospital,” she says. “I had her birth mom complete that form and I was ecstatic when she said she wanted me to be in the delivery room.”

The weeks before Elsie’s birth were full of excitement, anticipation and lots of uncertainty. 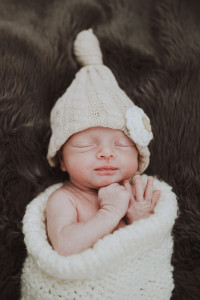 “I would not let anybody throw me a shower,” she explains. “I knew that there was a real possibility that they could change their mind at any moment and I didn’t want to have all of the gifts and celebration if it didn’t work out. And now with the perspective I have, I’m still grateful that I chose not to do the shower. I was able to pick out the necessities myself and not add to the overwhelming uncertainty of it all during such a chaotic time. Plus, all of my friends and family visited once we were home and showered us in gifts and love.”

Elsie was born in October and everything went, for the most part, as planned.

“When my daughter was born her birth mom held her for a few minutes, and then handed her straight to me — it was the most surreal experience,” Lupean recalls. “She ended up having to stay in the hospital for about a week and then after that week, we went to court, and we had to do a hearing where they signed away their rights so that I was able to leave town with her and go back to Cleveland.” 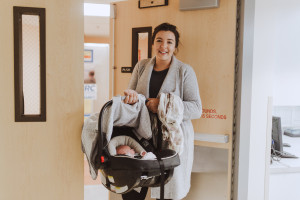 Anyone who has had the joy of bringing home a newborn knows how trying those first few weeks can be. Doing it solo, with only about eight weeks to prepare, took a lot of strength and a lot of learning as you go, for Lupean.

“I’d say the first six weeks of her life were way more of a struggle than I thought they would be,” Lupean says. “I think it was a combination of dealing with the actual adoption, but also, there’s no one there to tag you out when you need it. You can’t just run to the store. Every single diaper, every feeding, every everything is me.”

Lupean says she wouldn’t have it any other way.

Looking back, Lupean says one thing she would have liked to have been more prepared for was the emotions and feelings that accompany adoption.

“I would say that one feeling I wasn’t expecting to feel as a new adoptive parent was guilt,” she says. “I found myself feeling a lot of guilt. I am naturally a very empathetic person, but I found myself in these little moments of day-to-day life with a newborn feeling guilty that I was the one that was getting to experience this and that her mom wasn’t. And it took me a long time to let go of that guilt to fully embrace that this is my child and I don’t need to feel guilty for experiencing these things. When she would smile for the first time, that was something that always kind of lingered in my head. I think that had I been better prepared for all of the emotions that were going to happen once she was born, I would have been able to be more present.” 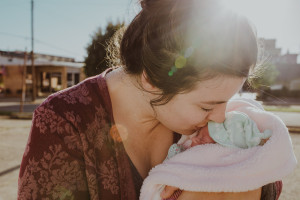 Being open about open adoption

Lupean chose an open adoption with Elsie’s birth parents and hasn’t shied away from telling Elsie about her adoption.

“I heard someone say that there is nothing shameful about the story of where you came from. It was really important to me, from very early on, to just be honest with Elsie,” she says. “Around 6 months old, I made her a book that included photos of her birth parents, from the hospital and coming home — a book of her birth story. So, she’s known from as long as she could talk that she was in her birth mom’s belly, and her birth mom wasn’t ready to be a mommy so she picked me to be her mommy.”

In an open adoption, the biological and adoptive parents essentially agree to have some communication with each other, which could include sharing photos and life updates, planning regular meetups and inviting birth parents and even extended biological family members to important milestone events. There’s not a “set in stone” way to have an open adoption, instead birth parents and adoptive parents can create something that works for their circumstances and preferences.

Lupean says she keeps a close relationship with Elsie’s biological maternal grandparents and has an open door for her daughter’s biological parents.

“I really dedicated the first three years of Elsie’s life to keeping her birth parents as involved as possible,” she says. “When Elsie was 6 months old we met at the Columbus Zoo. They came to her first birthday party. I texted photos and videos more than weekly and updates.”

Recently, communication has fallen off with the birth parents, which Lupean admits has been a difficult part of managing an open adoption. She says it’s important for people to know that there are some gray areas that come with it.

“People always ask me about my personal experience with open-ness and when I was researching open adoption, nobody seemed to be honest about it,” she says. “You either hear these stories of, ‘we’re so close that the birth mother babysits, for us,’ or it’s ‘so closed we know nothing about her.’ There’s never this middle. I feel like the truth is what will help people, people who are even afraid of open adoptions. Open adoption is a relationship like any other in your life —  it ebbs and flows. Sometimes you talk to your best friend every day for months and then life gets busy and things slow down before eventually picking back up again. Open adoption is a real human relationship that doesn’t have its own special rule book.”

Lupean says it’s all been part of her motherhood journey and Elsie’s story.

“She was born with a whole family,” Lupean says. “And that is still her family. I believe that she is still her mom. I’m her mother. But I totally respect and accept that that is the reality of her situation – the truth of her story doesn’t take away from the family we have created.”

Similar to the strong feelings Lupean experienced in 2017 about adopting, she had another compelling idea in 2020, which would benefit children in foster care.

“Christmas night of 2020 I put Elsie to bed and I was watching TV. I saw a suitcase on TV and I was like, I wonder if there’s a dollhouse in a suitcase,” she says. “I Googled it, and I couldn’t find anything like what I had in my mind. And I’m like, is this a thing? Did I just have an idea?”

Lupean immediately started sketching her vision of a portable dollhouse.

She says foster care was the first thing that came to mind when she envisioned the case, since most of the time foster youth do not enter their first placement with any personal belongings. Something that kids could easily fold up and move from room to room.

“And play is the most important thing for a child,” she says. “It’s how they process everything happening in their life. And so it’s really a great toy for them to process what’s happening and to have this safe little play space that’s theirs, when they first enter a home.”

Her brand, Play Maysie, was born, and within a few short months she was deep in the process of designing portable dollhouse cases.

The doll houses open on both sides, have interchangeable floors, come with magnetic accessories for easy clean-up and storage, and include a carrying strap so children can move around with it easily. By the Spring of 2021, her Kickstarter campaign raised about $30,000. She also won a $50,000 grant from Joanna Gaines to make her first round of inventory. She shipped her first batch of orders just before the holidays last year. Her goal is that a portion of all proceeds will go toward donating cases to youth entering foster care.

Earlier this year, Lupean also opened a Play Maysie storefront in The Arcade in downtown Cleveland and recently sent two trial run cases to youth who were placed in foster care.

While Lupean was successful with an unplanned private adoption, she says she’s very passionate about foster care and foster to adopt programs.

“I would highly encourage people that are looking to privately adopt to look into foster to adopt programs,” Lupean says. “I feel like everyone pushes towards private adoption and there’s such a long waiting list, but there are real babies and kids that need love and a home.”

Featured on the cover of the November 2022 issue of Northeast Ohio Parents, original story can be found at:

No more products available for purchase

Your Cart is Empty